Hilton, Steigenberger, Marriott, Kempinski – the list of references of the GH Hotel Interior Group is like the who is who of the international hotel society. From its head quarter in Baccum (Lingen, Germany), the company has risen from a producer of individual upholstered furniture to a realisation expert in the hospitality industry. 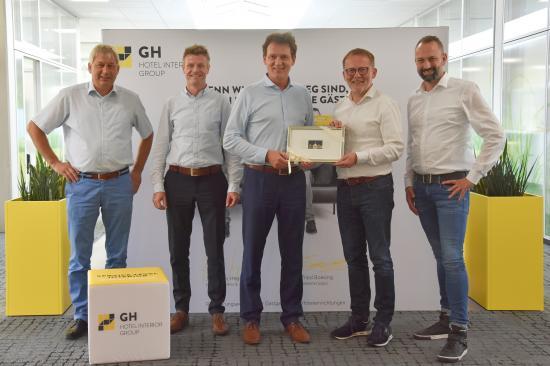 When CEO Johannes Hegger founded the company in 1996, its name was GH Internationale Möbelcollection. More than ten years later, the company went from Hopsten to Baccum in Lingen and is developing further and further. Last year the new office building with 800 qm of space for working has been opened. The head mayor of Lingen, Dieter Krone, with the local mayor Karl Storm and Dietmar Lager from the council's economic development visited the new building and got to know the details of the internationally acting company.

Successful as realisation experts for furniture and concepts

"We are developing individual interior and design concepts for hospitality project. We can offer the whole package of interior design and outfitting from planning to production and assembly", Johannes Hegger explained. "We say: When we are ready, only your guests are missing." Far more than a thousand upholstered furniture pieces have been developed from the company and its partner in Poland - BH and MWH Meble. Over a year, nearly 40,000 furniture pieces find their place in a hospitality project. "In Poland, nearly 300 employees furnish at two different production places for upholstery and outfitting", Hegger said. In Lingen, there are 24 employees working on project management and sales.

Regional networking as a key element

Within the last years, the company has focused on a sales strategy and employed Winfried Boesing as the Head of Sales. "We want to take a stand in the hospitality industry. Most hotel networks already know us. But the regional networking is a key element for success that we want to expand", Boesing explained the focus for the next years. Dieter Krone, Head Mayor of Lingen, was impressed by the wide offering range of the company: "That's what we call a 'hidden champion'. Many 'Lingener' have probably seaten on chairs or slept in a hotel room out of your production but might not have known about your company".

Besides the interior outfitting of hotels, the GH Hotel Interior Group is also furnishing Health Care Institutions, Serviced Apartments and Cruise Ships. The group of GH, BH and MWH had a volume of 28 million Euro within the last year. The company to increase to 32 million Euro this year.